Highlights from Porto to Lisbon

This 8-day train journey will take you to northern Portugal, discovering UNESCO world heritage sites, wine valleys, and untouched nature. You’ll stay in a comfortable, converted rural farmhouse. A perfect getaway for those who want to escape from their hectic city life. 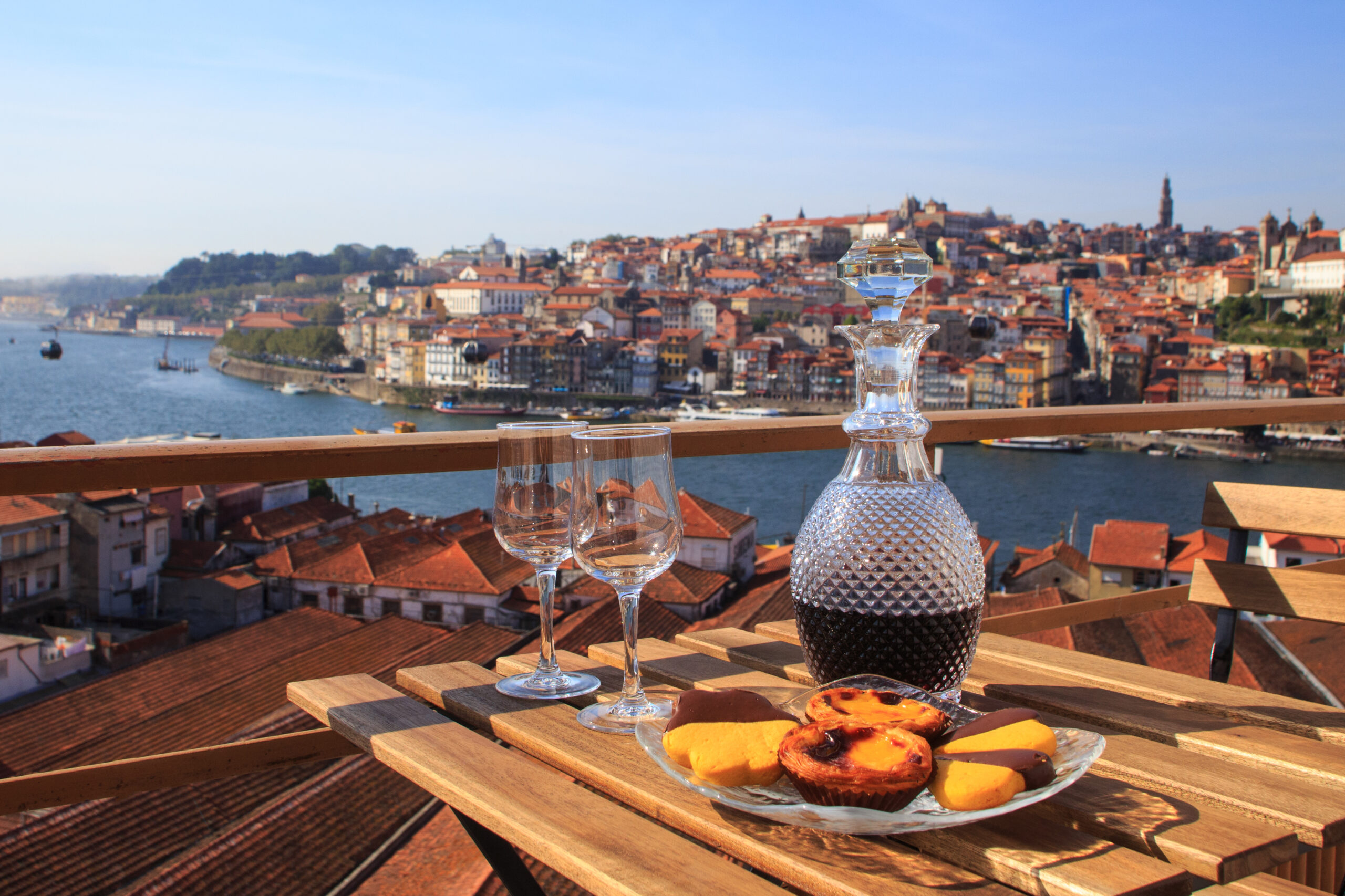 On the day of arrival to the coastal city of Porto, a private taxi takes you to your hotel. Depending on the time of arrival, you may have the option to walk around the city for some first impressions of its surprisingly steep hills and grand squares.

Porto is absolutely spellbinding with its tenaciously textured buildings, valorous variety of architecture, and Mesmerizing mix of color shades. Enter this laid-back city with a few great options to check off the travel list.

Take a cruise of the Douro River and connect with the Portuguese nautical triumphs and kindred relationship with the water. You’ll pass under the 6 bridges connecting both sides of the city, including Ponte de Dom Luís I, designed by Gustave Eiffel.

Day 2 | Porto | Porto, its blue-tiled houses and the Port wineries

Today charters an alluringly full day of marching around the city and taking in the various aspects of this old-world, rejuvenated city, declared a World Heritage Site by UNESCO in 1996.
Porto is a decorated playground of mazes and cobbled, tangled streets and hills. Brimming with brilliantly blue tiled buildings adorning the centre, the streets eventually widen into well-manicured, wide walkways.
Porto will tempt you today with charming options to see the city, don’t worry intended sites can be revisited tomorrow as well.
Stroll along the boulevards and reach the Ponte de Dona Maria Pia, connecting Porto and its friendly neighbor across the Douro River, Vila Nova de Gaia. This bridge was completed in the late 1800s by Gustave Eiffel (already famous for his Eiffel Tower in Paris) and is a star of the city still today. Cross the Douro river to visit the Port wineries on the other side in Vila Nova de Gaia. We’ll share our expertise on which wineries to visit and which Ports to try.

Every city has its token market, and Porto has the Mercado Bolhão, an identity on its own and a favorite of locals and tourists alike. Indulge in a gastronomic array of Portuguese delectables,
and the shop owners will be happy to share their stories with you here.

On your third day, you’re free to discover which of this northern area of Portugal speaks to you the most.

Perhaps spend half a day at the nearby district Matasinho. It’s just a few km away and is a favorite nearby jaunt for beach and surf lovers. It has for centuries been the source of the city’s fish and seafood prosperity. The market and non-stop rows of seafood restaurants remain from this past time and it’s not uncommon to see wonderful fish-fry happening on the side streets. You must pop onto the first terrace you see to take advantage of this culinary specialty.

Hop a bus to Braga, an important town in Portuguese culture and a success story from the time of the Romans, through the medieval era, to the present day. It warrants your visit with its medieval-style settlement, its Cathedral, a sacred art museum, and the Gothic-style Kings’ Chapel. Markedly, the Cathedral on the hill is one of the oldest in the country.

The famous Douro valley, for nature and wine lovers, is a landscape blessed with a swirling river running through its hills.  Today should be filled with hand-constructed terraces on the edge of its vineyards.  The many town stops along the way offer Baroque architecture, main squares that are journeys through time, and awe-inspiring views.
Combine it with a tour in Pinhão at a winery and learn what makes this so unique.
Train to Pinhão is itself a treat with its beautiful train station covered in blue tiles. 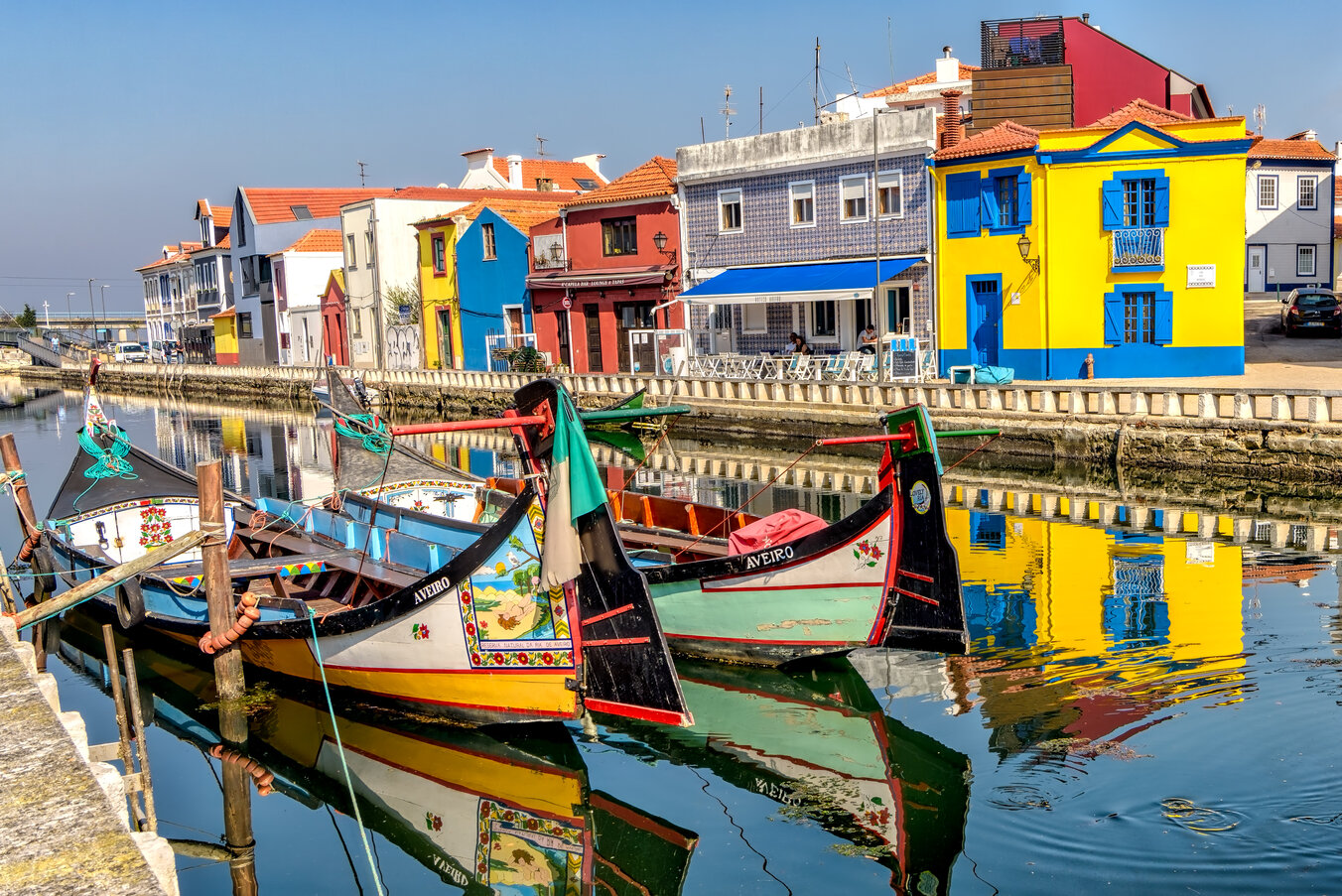 After breakfast, you will take the train from the beautifully tiled São Bento and in less than two hours you’ll pull into the colorful town of Aveiro. Famous for its canals and coined the “Venice of Portugal”, it allows you to take a local gondola or walk around the town following its waterways.

Interestingly, as in many other ancient cultures, the area of Aveiro has a history of artisanal, eco-friendly salt production – having already been a prosperous source of income and a well-regarded sense of esteem for Portugal by the 12th century. In modern-day times it is facing a decline, though many old salt warehouses, called Alavarium,  are still preserved in its old quarters that you may pass through today. You’ve never seen salt quite like this!

Being Portugal, it of course also offers exquisite codfish, often cured in this salt. There are ample choices to taste this perfection of the centuries by having lunch while gazing at the Atlantic. For dessert, Aveiro’s own sweet secret – Ovos moles, a lesser-known sweet bite found at any pastry shop along the route.

In the morning you leave by train to the historic city of Coimbra, famous for its university, one the oldest in the world. Founded in 1290, the building has changed little, and the town is still a hub for academics and a student-life culture unique and strong to its own device. Students dressed as they were centuries ago give you a taste of tradition with song and dance. If you like, they’ll also happily act as your guide around the university, or you may wander on your own.
Given its historic and current glory, it takes pride in its historic buildings but also its current, visually obvious, and wacky expressions of student uniqueness and individuality. 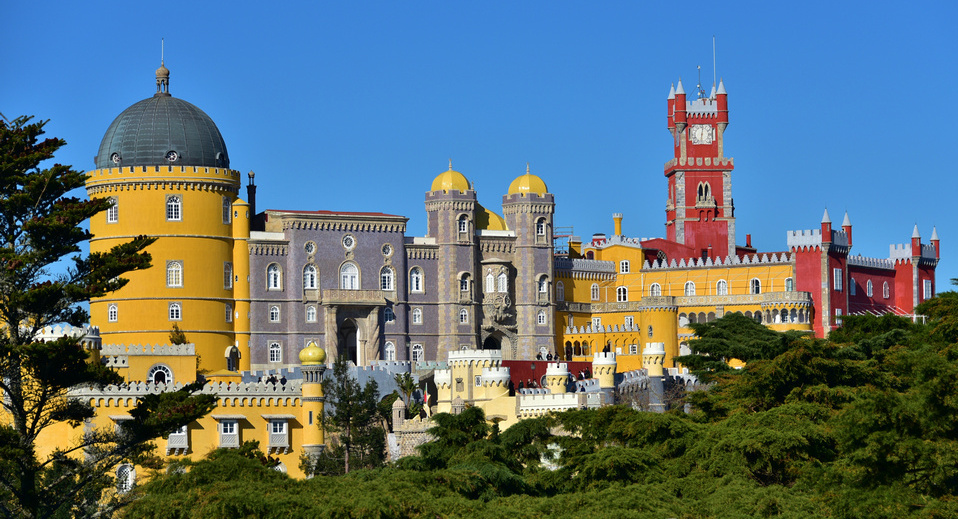 Within just 2-hours by train, you travel from Coimbra right into the heart of Lisbon.

Its city rebuilt from calamity to splendor through the centuries. Here you’ll find historical richness and creative brilliance alive in past and current form.
Lisbon is absolutely loaded with precious things to see and do, therefore we advise you to get ready to do some walking! But wait…Lisbon has seven different hills as well, so also expect to do some climbing!  It’s a well laid-out and planned city thanks to recent rejuvenations, so for those of you who prefer to take it a bit easier, we’ll assist you with other methods of transportation.

First things first – the classic “Tram 28”. This well-known and favorite tram route is a perfect ride to catch as it visits most of the tourist destinations, and it can save your legs on the surprisingly hilly streets of Lisbon. After a thorough ride and absorbing an initial sense of the city’s vibe, colors, rhythm, and beauty, hike up the first of the 7 hills, to Saint Jorge’s Castle. It’s one of the first fortifications built, dating from the 1st century BC, and is currently in wonderful medieval form.
It offers spectacular views of the red-tiled roofs and the sweeping landscape of the city.

Rise and shine this morning with thoughts of  “Pasteis de Nata”, the most delectable and scrumptious sweet of all sweets. Head 2,5km out of the city to visit The Tower of Belém which served as an embarkation and disembarkation for Portuguese explorers. Here, you’ll find a sweet little spot famous for its “Pasteis de Nata”, the recipe is still a guarded secret and you should try one now before continuing on to the adjacent Monastery of Jerónimos. Warning,  you’ll need a couple of minutes to catch your breath after entering, because of its beauty. Portugal was an empire at this time in the 16th century and was more than happy to show off its immaculate skills and wealth in the form of structures.

Sintra – by now you’ve heard it mentioned on the streets multiple times, and for good reason.
If you decide to go on a day trip, less than one hour away towards the coastal area of Lisbon lie the foothills of Portugal’s Sintra Mountains. A long-time royal sanctuary, the beautiful forested landscape is scattered with pastel-colored villas and palaces. Climbing upward and reaching the top of the hill, you’ll enter the Moorish and Manueline-style Sintra National Palace. Its fairy-tale design and sensational views of the powerful city and sea below are yours for the taking.

Today you head home, and depending on your flight time, you may head to the center for some souvenir shopping. We’ll arrange a hotel pick-up for you by private taxi.

Do you wish to extend your trip and or add a few extra stops, let us know and we will tailor this trip for you as you wish? 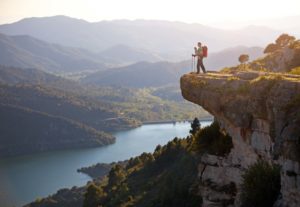 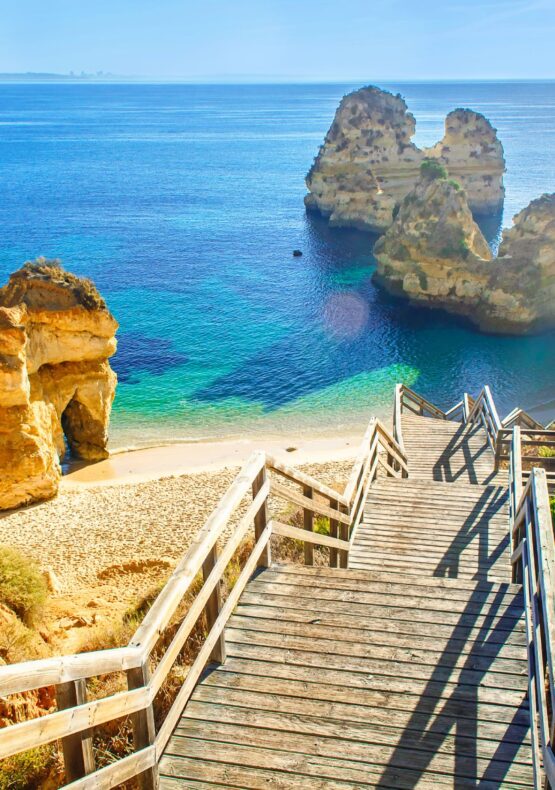 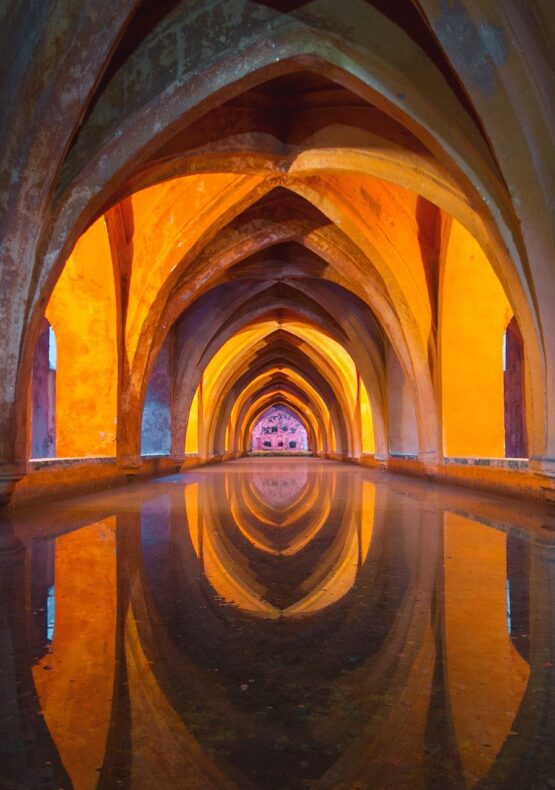 Highlights of Spain, taking in its best parts
Travel by train through Spain and take in its most charming corners 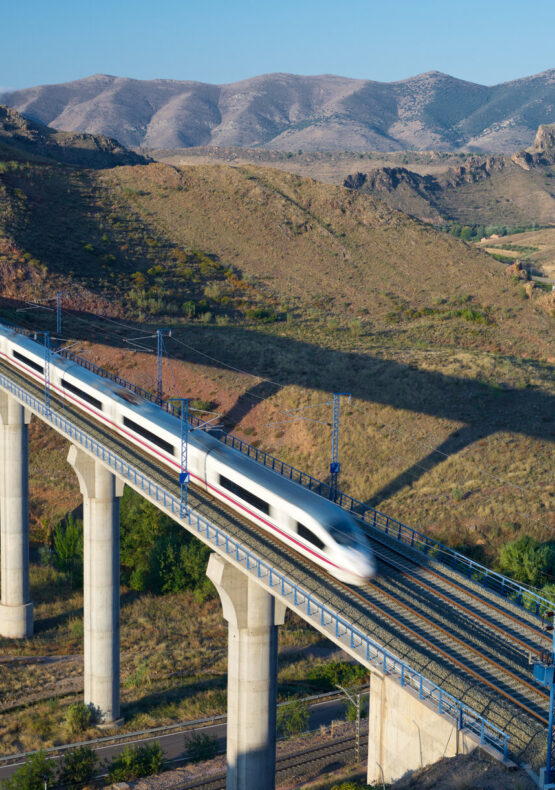